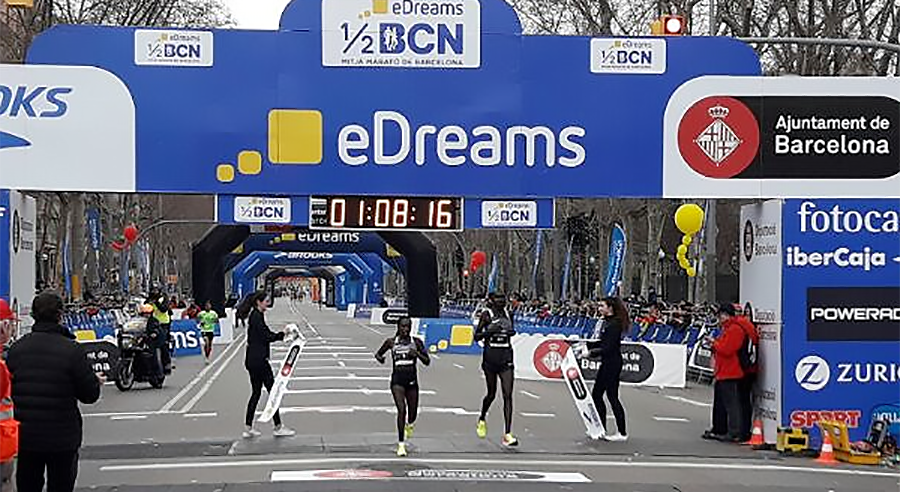 Her time was more than three minutes outside the half marathon world record of 1:05:06 set by her compatriot Peres Jepchirchir in Ras Al Khaimah last Friday, but Kiplagat – who broke the world record at this race in 2014 and 2015 – had stated before the race that she was not targeting a world record.

The windy conditions clearly hampered the athletes’ efforts. Paced by Kenyan Dickson Kipchumba and Spain’s Marc Roig, Kiplagat had requested a steady 3:10 steady pace with them for the first half of the race. As agreed, the trio reached the 5km point in 15:47, 37 seconds ahead of the chasing group formed by USA’s Sara Hall, Ethiopia’s Kuma Dibaba, Ireland’s Fionnuala Mc Cormack and Portugal’s Jessica Augusto.

After covering the second five-kilometre segment in 16:03, Kiplagat reached 10km in 31:50 while Dibaba and Hall trailed behind by 68 seconds, themselves 11 seconds ahead of Augusto and 25 clear of McCormack.

Although Kiplagat’s pace dropped further in the second half, she increased her advantage over Dibaba to 94 seconds. Augusto was in third another 20 seconds back but eight seconds clear of Hall in fourth.

At the tape, the former world record-holder signed her fourth win in a row in Barcelona with a relatively modest – by her own lofty standards – 1:08:15, more than a minute quicker than her winning run in Barcelona last year.

“I’m satisfied with my win but also a little bit disappointed as the wind has annoyed me a lot,” said Kiplagat, who will turn 30 later this month. “I would have liked to run under 1:06 today but at this early stage of the season I’m not at my peak as I’m still in full preparation for the London Marathon in April. I love to come back to Barcelona every year; I realise people already know me and really appreciate me.

“It’s OK, records are there to be broken,” she added when asked about Jepchirchir’s world record earlier in the week. “I’m now happy for her and we’ll try to regain the record in the future.”