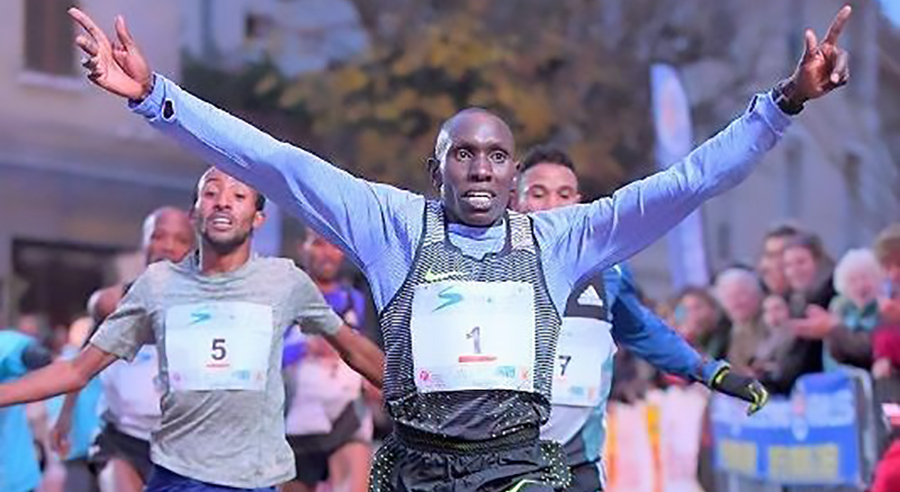 With his win, the 23-year-old Kenyan became the third most prolific winner in race history with three victories, equalling the tallies of Fernando Mamede and Micah Kogo, but behind Jacky Boxberger who won the event four times and well behind Khalid Skah, who triumphed on eight occasions.

Even though Kangogo lowered his 5000m lifetime best to 13:10:80 in May, it was difficult to gauge his form as he hadn’t raced since early September.

Yet from the outset he illustrated his ambitions as the man to beat. He took the lead about two minutes into the race along with 20-year-old Franco-Swiss Julien Wanders, the French U20 record over the distance.

The large leading pack hit the first kilometre in 2:51, suggesting a possible finish time of about 28:30. After passing the three kilometre checkpoint in 8:35 Kangogo made his first move, breaking up the field behind him.

Kangogo then slowed the rhythm leaving Wanders in command. The lead pack hit the midway point in 14:20 with Kangogo appearing strongest. He tested his opponents with another big move in the sixth kilometre, but the pace again slowed allowing the pack to regroup.

With three kilometres remaining, Griffiths and Connor drifted back, leaving seven in contention.

A kilometre later the lead runners waited to see who’d make the next move. Wanders ratcheted up the pace but didn’t manage to pull away, with Kangogo matching his move.

The race came down to a fierce sprint over the final 300 metres. As he did a year ago, Kangogo unleashed a strong kick to win in 28:19. In a blanket finish, just one second separated the first five across the line.

“I’m very happy to win for the third time,” said Kangogo, who was credited with the same time as Mekonnen, Dazza and Ndikumwenayo. “I tested the other athletes several times and then I awaited the sprint.”

Wanders wound up sixth, just three seconds adrift of Kangogo. “I’m very happy because I beat the senior Swiss record of 28:25,” said a delighted Wanders who shouted with joy when crossing the finish line. “I wasn’t that far from the victory but they were too strong. It will be for another time.”

KIBIWOT SMASHES WOMEN’S COURSE RECORD
In the women’s contest, Viola Kibiwot produced an impressive solo run in her first 10km on the roads.

The Kenyan, who was fourth at the 2015 World Championships over 5,000m, promptly established a huge lead over Briton Katrina Wooton, a gap that she extend to more than twenty seconds after seven kilometres.

Kibiwot didn’t fade in the waning stages, eventually crossing the line in 31:14 to smash the previous course record by 14 seconds. Her performance ranks her as the ninth fastest over the distance on the roads this year.