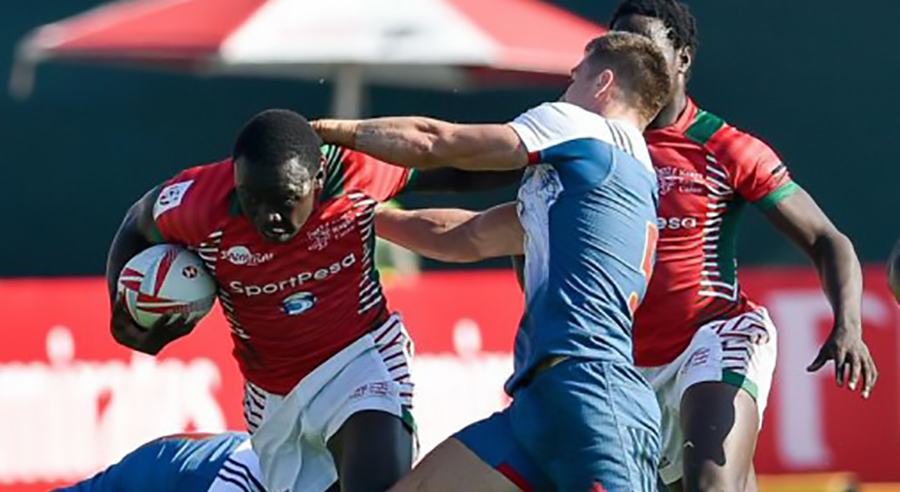 The gods of rugby seemed to be on Kenya Sevens’ side yesterday in South Africa during the second leg of the HSBC World Rugby Sevens in Cape Town.
William Ambaka carried forward his impressive form from Dubai by scoring the first try in the first two minutes of the match.

Augustine Lugonzo’s failed conversion would haunt Kenyans a minute later when French captain Terry Bouhraoua touched down just below the post followed by a conversion to put his side in the lead.

However, the Europeans were caught napping by the sensational Billy ‘The Kid’ Odhiambo who picked the ball out wide and sprinted past the French defence to score just below the post. Lugonzo did not miss there after as the game stopped at 12-7 for half time break.

In the second half, Ambaka embarrassed new substitute Stephen Parez with his trade mark hand off that left the French helpless as the Kenyan sprinted to the try line.

Tension and anxiety swept across the Kenyan ranks when Lugonzo was sent to the sin bin for a two-minute interval but coach Innocent Simiyu brought in Dan Sikuta for Ambaka.
Sikuta’s impact was immediate as he set up Leonard Mugaisi for Kenya’s fourth try as Lugonzo returned to the pitch. Cyprian Kuto’s pace and skills came in handy as he ripped the French apart by sucking in all their defenders on his way to the try line. Bouhraoua’s final try was inconsequential; Kenya won 33-14.

In last year’s inaugural Cape Town Sevens, Kenya lost 26-28 to France in the Main Cup 3rd place play offs.
Then came the grudge match; with memories of Singapore Sevens Final still fresh in minds of both Kenyan and Fijian players, the question was who would have the last laugh this time.

However, with Samisoni Viriviri, Emosi Mulevoro and Sevuloni Mocenacagi all starting for in Fiji the Kenyans literally battled to get their hands on the ball.

Simiyu’s charges were stunned by an on-song Fijian side scoring three tries without any response from Kenya for a 21-0 lead before debutant Martin Owila scored a consolation try to give Kenyans hope ahead of the break.

The second half was filled with entertaining and dramatic moments as Kenya produced a stirring show to match Fiji inch for inch.

Nelson Oyoo scored a quick try to reduce the deficit to 21-12 before picking a neat pass from Brian Tanga. Oyoo ducked past Fijians but Sevuloni Mocenacagi held onto his shorts as he struggled to touch down.

Television replays showed that Oyoo’s toe was on the line to deny him the all-important try.

Fiji scored another try to widen the gap but Kuto responded by taking advantage of a disorganised Fiji defence to score his second try of the day.

Lugonzo’s missed conversions let Kenya down as the match ended at four tries apiece for both teams.