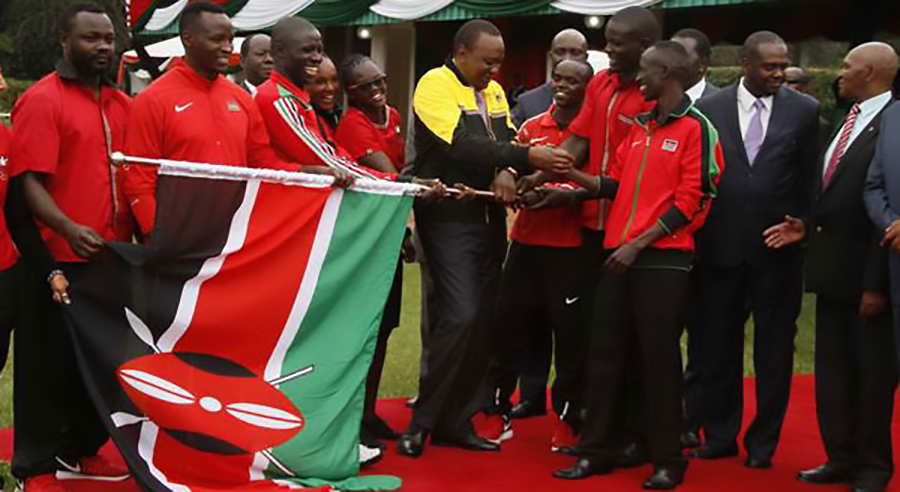 The first batch of Kenyan athletes to the 2016 Olympic Games has hit the ground running after arriving safely in Rio de Janeiro, Brazil on Sunday evening.

The delegation of 60 athletes and officials that left the country on Sunday morning was received by the team’s Chef de Mission, Stephen Soi.

All arrangement for Team Kenya to settle in the Olympic Village have been finalised.

Mr.Soi said that members of the technical teams of the disciplines involved have already had time to visit various training facilities.

Others were the judo, archery and weightlifting teams, comprising one athlete each, and a three-man boxing squad.

Sevens rugby coach Benjamin Ayimba said the team will embark on training once the players have had enough time to rest.

For the first time in recent years Kenya has a realistic chance of bagging a team medal at the Olympics.

Kenya Sevens can take confidence from their splendid performance at the last two Sevens World Cups.

Pooled in group C alongside World champions New Zealand, who are also 2014 Commonwealth silver medalists, England and Japan in the 12-team Rio rugby competition, the Benjamin Ayimba coached charges will be buoyed by their scintillating show at the Singapore Sevens in April, which saw them claim the Main Cup for the first time in their history beating Fiji 30-7 in the final.

At the same time, the next batch of athletes that was scheduled to leave the country on July 31 could have their date of departure pushed forward by a week.

This group is largely made up of track and field athletes who have been training at the Kipchoge Keino Stadium in Eldoret since the team was named at the national trials last month.

But with the athletics programme in Rio set to get underway on August 12, seven days after the games opening ceremony, the athletics team is looking at the possibility of rescheduling their departure date to August 7.

However, Nock secretary general, FK Paul, said no final decision has been arrived at and the tentative date of the contingent’s departure remains August 31.

The women’s 10,000m team will have the enviable task of jumpstarting Kenya’s gold rush on day one of the athletics programme on August 12.

Next will be the women’s marathon team which will enter the fray on August 14. The team of three comprises world silver medallist and Tokyo Marathon champion, Helah Kiprop, London Marathon champion, Jemima Sumgong, and 2016 Paris Marathon winner, Visiline Jepkesho.

All three athletes were part of the Kenyan team at the 2015 IAAF World Championships in Beijing, China.